One Sharper Image Catalog Too Many 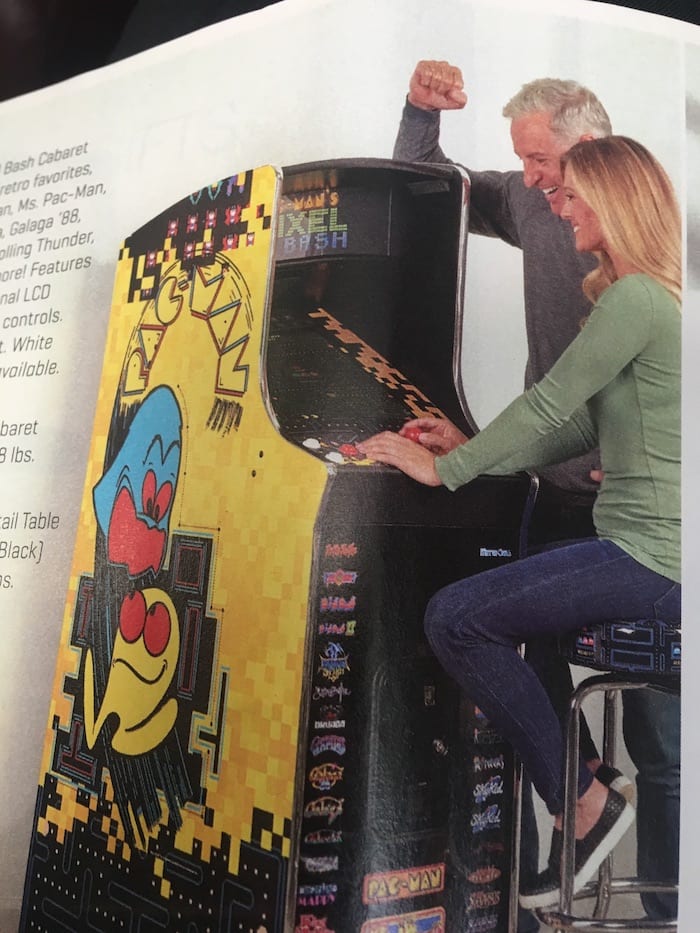 "Cabaret." Like it's some tuxedoed sophisticate's evening of jazz and champagne.

"A little drinks, a little nightlife, a little dancing..."

They're doing some real perspective work, for the photo of this Pac Mat's Pickle Bash Matinee. You're supposed to be spellbound by your childhood memories of loitering around hulking arcade cabinets, lusting after quarters or tokens spilling into the silver bowls of brown CHANGE machines. (Too young to lust after anything else.)

The Brat Pack Pixel Rat Gamma Ray! Gotta have it!

But look how the models here are really off to one side — she's not in front of it, she's angled around the corner. And pay attention to how thin the Pat Mat Pixel Wat Cabinet really is.

I am potentially very much in the market for an authentic, full-size arcade cabinet with an era-appropriate dim, buzzy cathode-ray screen. Preferably with little Galaga level-up chevrons burned into the lower-right corner even though it's doing duty as a Ms. Pac-Man.

(This thing has Mappy, though. Mappy is so good and it doesn't seem to get as much retro-love as some of your other favorites from the Gold Mine down at the Mall of Memphis, across from the ice-skating rink, which you think about everytime you see Wyatt and Gary get slushied by the cool bros and everybody's wearing Chess King.)

The guy's hand, so weird. I think this is a model thing. The photographer says "give me really excited!" and dudes are like, "uh, I mean I guess I could make some sort of fist that I would never do in real life?"

Tiger hits a long putt, yes sure, fist-pump. "Jeannie got to Act III without losing a guy! ‡ My ex never even wanted to play Ms. Pac-Man. Fist pump!"

(Also her hands. I can totally understand if a grown adult lady has never played a Pac-Man variant, but no one holds the joystick that way. It's not a buffalo nickel you're about to inspect with your numismatic loupe. You gotta nestle that ball in the meat of your palm. It's closer to arm-wrestling than teacup-lifting.)

When the pixel-munching generation moves into retirement I expect a lot of metaphors re: men and "classic" videogame mechanics/dynamics.

GENERATION DOUBLE-A GRAD STUDENT: "The Gen X man's metaphysic was that of a Jouster, perched upon his trusty Ostrich in constant battle-readiness. Always looking to hit another Jouster, his lance at least one pixel higher up than the other's, in order to steal the other's Egg. Should the Egg not be collected in time, a little challenger might burst forth, ready to take up arms against its father's antagonist."

(welp. Joust was my favorite retro game until just now. Mappy it is.)

‡ Except she didn't because the screen here gives the impression that the game is right at its beginning configuration. Another reason the guy's white-knuckle fist looks absurd.